Are you enticed by the picture? Study it and you will find the rare combination of the mountains, the rocky hills, beautiful terrain lands, and the small houses at the banks of the Kaligandaki River. Isn’t it incredible? What do you think? Let us know about it.

Lies in the northern part of western Nepal, Upper Mustang is the walled city, once a prohibited kingdom of the Himalayas with its distinctive landscapes along with the rocky trails.

It is one of the unique trekking harbors of Nepal, is a preserved area enriched with Tibetan culture, ancient monasteries, and a customary village with a cave castled at the top of the cliff.

Trekking at Upper Mustang bestows you with the thrilling experience, once in a lifetime. The dazzling view of Mount Annapurna, Mount Dhaulagiri, and Niligiri in the desert-like landscape can be rare to view and explore. Once an abandoned city, now can be considered a school to learn the ancient Tibetan culture because till now people in Upper Mustang speak Tibetan dialects and bound within the real Tibetan civilization. 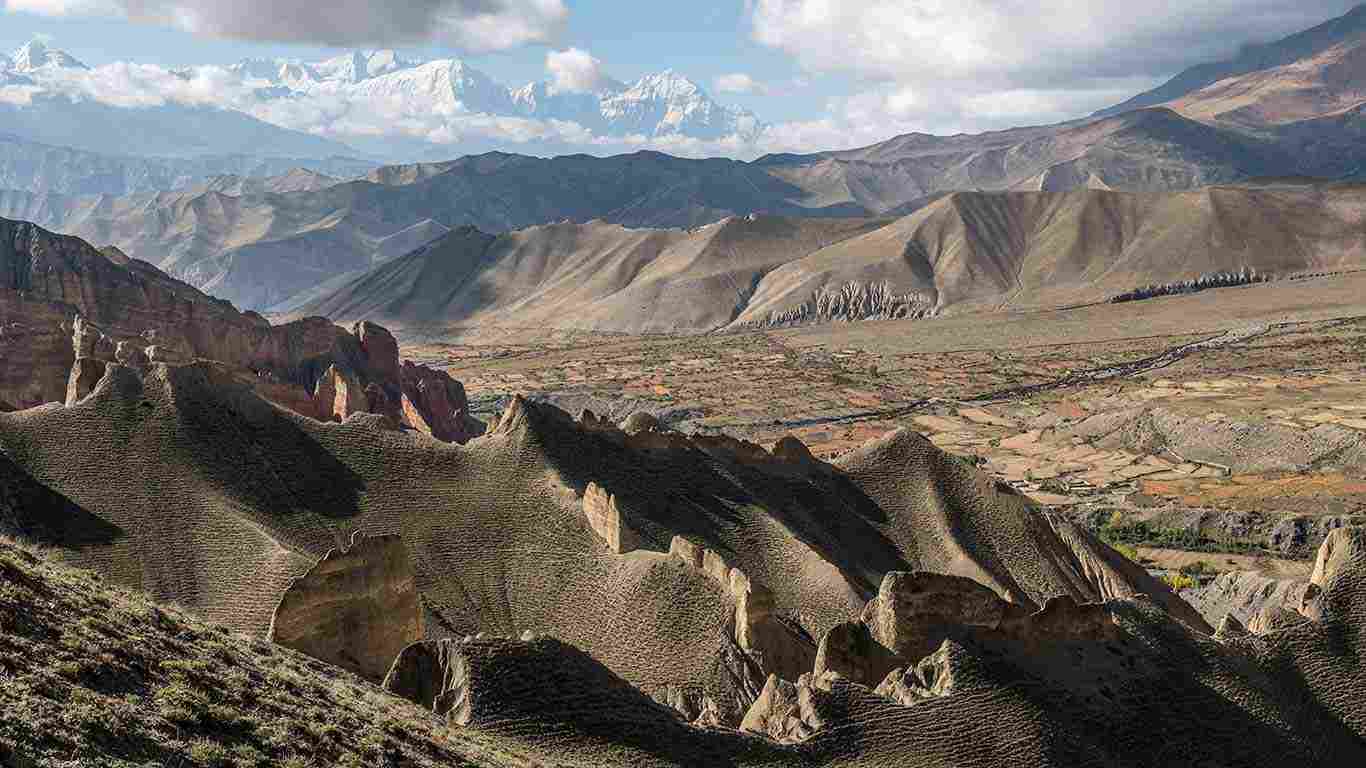 What a dreamy land? When visiting Upper Mustang Trek, feels like stepping into a Disney land full of mystery and amazement. The uniqueness of this place is incompatible as it appends the beautiful caves and rock paintings. As a whole, Upper Mustang Trek can be considered a canvas itself as, a rain shadow area that falls under the Annapurna and Dhaulagiri ranges, and offers a rare glance of nature.

Where is Mustang Located?

Mustang, one of the districts of Gandaki province of today Nepal, is located in the Kaligandaki valley of the Himalayan region. It lies in the western part of Nepal, comprises two regions- Upper Mustang and Lower Mustang, and falls under the Dhaulagiri Zone.

Previously an independent kingdom, Upper Mustang consisted a close knot to Tibet, became a protectorate of the kingdom of Nepal in 1795. Till 1992, this place was a demilitarized zone, and the access to people to enter this place for trekking and exploring was granted in the year 1992 but with the restrictions (Less than 1000 visitors were allowed annually). It has become just around 15 years since trekkers from foreign were allowed to travel Upper Mustang. The position of Mustang as a kingdom ends in 2008.

The fantastic and thrilling route of this trek is incomparable to any other trekking route that lies in Nepal. A trans-Himalayan region with rocky trails and Tibetan influences can lead you to the most honorable zone to experience.

As there is no straight connection between Kathmandu and Upper Mustang. So, make layovers in the beautiful city Pokhara to reach Upper Mustang.

Here is a two-way to reach Upper Mustang.

· Take a domestic flight from Kathmandu to Pokhara, which takes just 30-minutes to reach.

· Again from Pokhara, you can take a 25-minutes flight to Jomsom (A starting point of Lo Kingdom, Upper Mustang)

· Jomson to Kagbeni(a doorway to Upper Mustang), needs 3 to 4 hours depending on your walking speed

· Syanbochen to Tsarang, which requires 6 to 7 hours of hiking, and finally reaches Lo Manthang within the hiking duration of 8 to 9 hours.

· Rent a taxi or choose a local bus to reach Jomsom from Pokhara. (Time duration is 6 to 8 hours)

· And then start a journey from Jomsom to Kagbeni, Chele, Syangbochen, Tsarang, and finally Lo Manthang (Upper Mustang) by foot.

Pokhara, one of the most amazing places to explore, is a doorway to the Himalayan region of the Northern and western areas. So. Pokhara has directly linked with the Jomsom Airport (a gateway to Upper Mustang Trek).

You can reach Upper Mustang from Pokhara either by taking a flight or using the vehicles ( Car, Jeep, Public Bus….)

· From Jomsom, take a walk through a series of places like Kagbeni, Chele, Syanbochen, Tsarang, and finally reach Lo Manthang, a capital ancient city of upper Mustang.

·  Take a jeep or rent a bike or go by public bus.

·  It takes 8 hours to reach Jomsom and you have to go through a series of villages (Kagbeni from Jomsom, then to chele, Syangboche, Tsarang, and to Lo Manthang) by foot (long hiking) to reach Upper Mustang.

How hard is Upper Mustang Trek?

Upper Mustang Trek is considered moderately difficult. But one should not overlook the topography and climate conditions there. It lies at the altitude of 3840 meters above sea level, the climate there threatens you continuously, in every step of your excursion. You ought to experience periodic switchback in high altitudes.

So, trekking to the Upper Mustang consists of many ups and downs with the frequent changes in the climate so is a little bit challenging but worth visiting.

What is the best time to go to Upper Mustang Trek?

The summer season is considered the best time to go to Upper Mustang Trek, where you can eyeshot the incredible mountainous views and beautiful landscapes along with the outstanding weather.

If you want to experience some of the unique festivals, then the month of May and September is the best to choose for trekking. Local people of the area celebrate the annual festival named Tiji in the month of May, where the monks dance by wearing colorful dresses. Early September allows you to watch a very unique festival named Yarlung, a horse racing festival, which can be entertaining to watch for the visitors/trekkers.

June to September can be the month to explore the vegetation of the Himalayan region.

How much does Upper Mustang Trek cost?

On average 10-14 days are required for Upper Mustang Trek. But it can be extended to personal choice. So, the Upper Mustang trek cost differs on the packages you choose.

We are discussing the cost on average (which can be varied).

Can Upper Mustang Trek be done in Winter?

In general, it cannot be said that trekking to Upper Mustang is not possible during winter. There are some of the major attractions which you can enjoy during winter like La Phewa, a festival celebrated in January and Toren La celebrated in February, where unique rituals are performed and let you explore the culture and traditions of the specific area.

But it is better to avoid the winter season if you are planning to trek to Upper Mustang (a true adventurous trekking route).

The winter month from December to February is harsh with the heavy snowfall. The trails could be blocked by huge snowfall. From the 2nd week of December, people there start to migrate to other places due to which you may find difficulty in getting a place to eat or stay.

In winter, the temperature there starts falling and can reach -25 degrees Celsius, which could lead to an intolerable situation for the trekkers, eventually destroying your enthusiasm for adventure.

The lifestyle of Upper mustang

The major population of the Upper Mustang speaks the Tibetan language and the people there follow Tibetan cultures and traditions. Buddhist culture is prominent in the area, where Thakali, Gurung, and mainly Tibetan people reside.

Known as the hidden kingdom, this place is dependent on the tourism sector. People even are involved in animal husbandry and agriculture.

How is the trekking route in Upper Mustang?

Attributed to the ancient caves, rock art, gompas, monasteries, and panoramic vistas of beautiful mountains, Upper Mustang has been alluring a large number of trekkers, even though the route is moderately difficult.

The trekking route follows many ups and downs. The trekkers ought to find the fluctuation while paving their way. Much high-passes to cross and lofty slopes to negotiate, which could add too much pressure on your foot.

The route is not that easy and graceful to cross but still being a dry and flat land, one can pass through the route and enjoy the adventure. But the things to be taken care of is, for the graceful crossover of the trekking route of Upper Mustang you need to have a proper level of fitness (does not mean a little much weightage person cannot do this).

The valley full of monks and monasteries with wide moral and cultural values is a dreamy destination that does not disappoint its visitors, which means that the Upper Mustang trek is safe.

When considering the topography, it could be a little bit challenging but with good guidance, one can trek the Upper Mustang safely and conveniently.

What is the main attraction of Upper Mustang Trek?

Enriched with the archaeology, biodiversity, and cultural heritages, Upper Mustang Trek has far more to offer to its visitors.

Some of the major attractions of Upper Mustang list here.

Things to do in Upper Mustang

·  Mountain Biking ( which requires confidence and a lot of energy)

·  Horseback Riding (You can ride a horse and visit the peaceful region) and many more.

Things to take while going for a trek in Upper Mustang

We recommend you carry some of the required things, here’s the list.

· Your basic requirements like clothes (based on the season you choose for trekking), a pair of slippers, towels, hygiene kits, and first-aid kits.

·   Skincare products to protect your skin from sunburn. You even can use a hat, and cap for this.

Sites that you can observe while trekking to Upper Mustang

On the way from Jomsom to Upper Mustang, you ought to see some of the interesting sites which lets you have a blissful experience.

·   Lo Manthang (a walled city and ancient capital of Mustang)

Upper Mustang, being a restricted area is not possible for solo travel. You can process for the individual travel but needs to ask for a permit to enter. Without a registered guide, one is not allowed to visit, as it is under the control of the Nepal Government.

Upper Mustang is the most unique valley with respect to its topographical structures, climate, and landscapes, having a distinct Tibetan lifestyle and tradition.

Though needs a permit to enter the zone, Upper Mustang Trek is a heavenly experience and the great adventure one can pursue for a lifetime.

Then, are you ready for an adventurous journey to create memories for a lifetime?

Plan and escape to Upper Mustang. It will not let you down, it’s faith.

1) What is Kathmandu to Mustang distance?

The distance from Kathmandu to Mustang is 203 kilometers.

2) What is Pokhara to Mustang distance?

The distance from Pokhara to Mustang is 88.7 kilometers.

3) What is Kagbeni to Upper Mustang distance?

There is no exact information on Kagbeni and Upper Mustang distance. But to reach Upper Mustang from Kagbeni, one should cross the villages like Chele, Syanbochen, and Tsarang by foot which takes around 4 days.

4) How many days does it take to trek in Upper Mustang from Kathmandu?

It hinge on your choice of transportation. If you go by road, it will take more time but by flight, fewer days are required. On average, the trek to Upper Mustang from Kathmandu takes 5 to 6 days (for one way).

5) Why is Upper Mustang a famous Trek in Nepal?

Because it is the hidden gem that bestows the panoramic view of mountains, ancient Tibetan cultures, old monasteries, and many more. The adventurous journey with the blissful nature can be merged only by trekking to the Upper Mustang area. So, it is a famous trek in Nepal with distinctive quality.

We help you explore your destinations before visiting.